In this previous post, I wrote some code that took a particular approach to saving uncompressed AVI files (i.e. just frames consisting of device-independent-bitmaps) from the webcam in Silverlight 4 by writing an application that;

I went this route because I’d originally intended to try and compress the video frames ( which would take a tonne of time and needed to be divorced from the capturing of the video ) but I never got there. Consequently, it all got a bit more complex than it perhaps needed to be and it also involved the application requiring elevated trust to do step (2) above.

Over the Christmas break, I got to rewrite that code ( on a very rainy day ) and I’ve another version of the application. It’s embedded in the page below, doesn’t require full-trust and should run in the browser with the Silverlight 4 beta ( if you’ve got a webcam that is, I don’t do much in the way of checking around that 🙂 ).

Note – you might want to right mouse and install this out-of-browser as I notice that the sizing isn’t “quite perfect” when it’s in such a small window as the one below.

This code takes a different approach in that it works something along the lines of;

The basic idea being two-fold

It seems to work out reasonably well – naturally, the file being written is still uncompressed video so it is still extremely large. I also chose to write out 32bpp rather than 24bpp so it’s even bigger than last time around although that’d be easy enough to change. 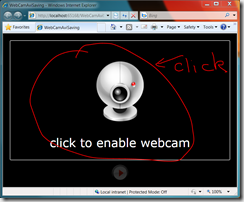 you get the persmissions dialog; 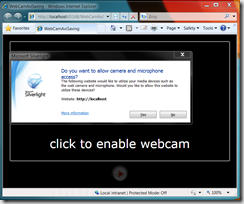 that enables the record button ( yes, it’s got the icon for a “play” button, sorry ); 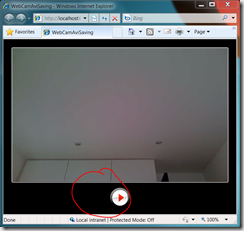 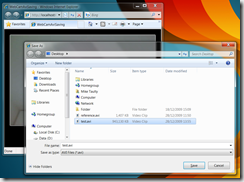 and then it records with a basic progress indicator; 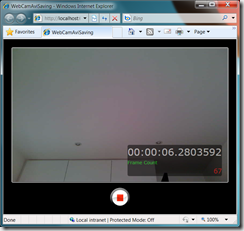 There’s still at least a couple of outstanding problems with this, especially;

but, once again, if the code’s of use to you then I’ve put the solution here for downloading. It’s not quite-as-shoddy code as the last variant on this theme but it’s quite a way from “production level”.