This is what’s known as a “on the train” project 🙂

I wanted to get a version of Kaxaml that understood WPF 4.0 Beta 2 and so I spotted that the source was on CodePlex and thought I’d set about downloading it and seeing if I could get something going.

So, rather than contribute to the wrong code-base I took some simple steps that you might be able to replicate to get a Kaxaml for WPF 4 up and running. Took me about 10 mins on the train.

Note – this just comes from 5 mins of hacking around.I’ve never used that SharpDevelop control before but these felt like semi-sensible changes to make based on the code that Kaxaml seemed to have previously.

With that in place, the code compiles and runs and I can type a bit of WPF 4.0 Beta 2 XAML into it; 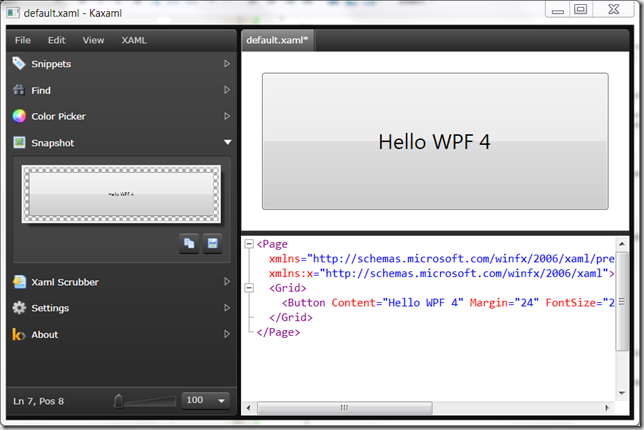 but – a couple of other things I’d want to do here. One is a pet peeve in that I’d always like to be able to collapse that area on the left hand side so I thought I’d drop in a quick Expander. So, I opened up MainWindow.xaml. In there is a Grid which contains;

and I just wrapped a Grid within an Expander around the first 4 of those controls ( the DocumentsView is in the other grid column on the right ). I set the Expander so that it had an ExpandDirection of “Right” and set IsExpanded to be “True” so now I have that change; 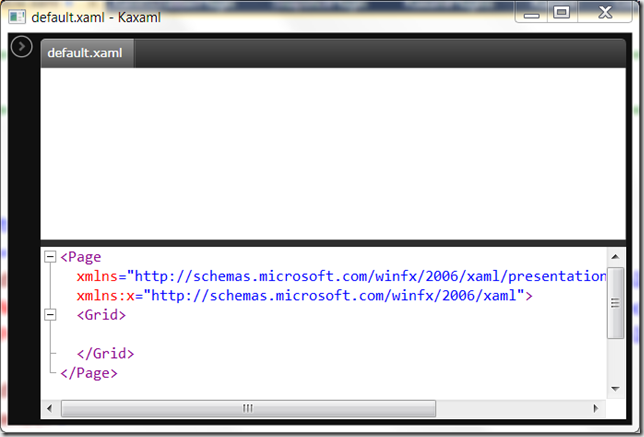 But there’s still ( at least ) a couple of problems with IntelliSense. One is that I kept getting an unhandled exception around line 1067 of KaxamlTextEditor.xaml.cs where it sorts an ArrayList. The exception was around the item type not implementing IComparable. The item type is a type called XmlCompletionData and it already has a CompareTo implementation so I simply went to that type and added the IComparable interface to its declaration. Seemed easy.

The other aspect is that I think the IntelliSense that’s being displayed will be out of date with respect to WPF 4.0 Beta 2. For instance, trying to use the new UseLayoutRounding attribute shows that it’s not in the IntelliSense which looks to be driven by a file called XamlPresentation2006.xsd in the Schemas folder.

Fortunately, that’s when the train pulled into the station – I’ve not yet figured out whether there’s a replacement XSD that I can drop into Kaxaml to tell it about XAML in WPF 4.0 because I’ve a sneaky suspicion that the VS editor moved away from being XSD driven and so maybe that XSD doesn’t exist any more. I’ll do a bit of research and update the post if I find out what the right thing to do is but, for the meantime, I’ve got a “working” Kaxaml version on WPF 4.0 for demos and so on.