Following up on this post, it’s very much worth pointing out that there’s a new version of the Silverlight Toolkit that goes alongside the version 3 bits.

The Silverlight Toolkit includes a bunch of functionality that’s not present in Silverlight itself and allows for the teams to do some innovation around what [may/may not] go into the next version of the product.

What do you get in the toolkit? A bunch of controls and other bits that generally make your life building a Silverlight application a lot more pleasant. These controls are banded into 4 buckets according to how far along in their lifecycle they are;

I’m not sure whether there are any controls currently in the “Mature” band – perhaps that’s not unrealistic given the age of the Toolkit and the speed of innovation on both the Toolkit and Silverlight generally.

Examples of controls/classes in the other bands would include these below ( some of which were originally slated to be part of Silverlight 3 itself but have remained in the toolkit for V3 );

That’s not a definitive list – there’s many more but you can see a lot of them in action by installing the Toolkit and then browsing to the equivalent of;

and taking a look at default.htm which brings up a Silverlight UI where you can explore the various bits and pieces – the images below show some charts, the DataForm, the themes and the TreeMap; 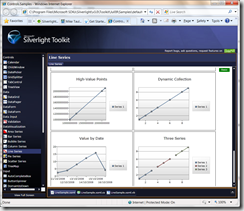 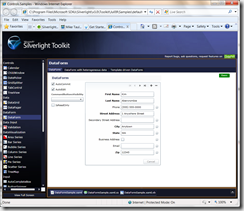 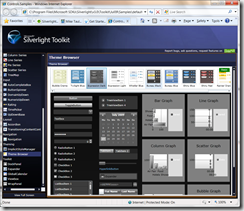 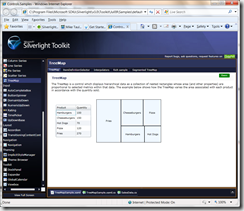 Ultimately – if you’re building a Silverlight application then you need to have the Toolkit installed as an extra set of (free :-)) resources to build into your application and, also, as a great learning tool for picking through source-code to see how things have been built.