Following up on yesterday’s amazing breakthrough with “Silverlight:Pong” 🙂 I thought I’d follow a bit of this XAML Continuum myself and move my Silverlight Pong to WPF.

I wanted to maintain a single code-base as much as possible. It’s fairly easy to cross-compile C# code by using conditional compilation where necessary for WPF/Silverlight ( Silverlight projects already define the SILVERLIGHT constant which is useful ) but I wanted to also try and have a single lump of XAML so that pretty much all the files in my WPF project were just linked from the Silverlight project.

I started to ponder about using the C++ preprocessor in order to do some pre-processing on my XAML when Marc pointed out that Ben had already done that in an MSBuild style manner;

Using the preprocessor to share incompatible XAML between SL and WPF

and that also links up a little with this post from David;

A custom preprocessor for sharing XAML between Silverlight and WPF

although I didn’t actually use that second technique but I did use Ben’s preprocessor stuff from MSBuild. Having said that, I found that I had to hack at Ben’s .targets file a little in order to make it do what I want – more on that in a second. Here’s my projects in Visual Studio side-by-side. The first one is the Silverlight project and the second one is the WPF project;

You’ll notice that almost every file in the WPF project is simply a link to the same file in the Silverlight project. There are one or two exceptions;

As I say, my Window1.xaml ends up looking like this;

and then in a few places ( specifically MainPage.xaml ) I’ve got XAML with conditional compilation as in;

So…what issues did I encounter along the way here;

So, with that all done I can run up my WPF Pong version; 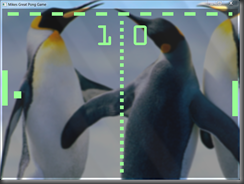 and, just like I could in my Silverlight version I can hit the “L” key in order to load up a replacement UI; 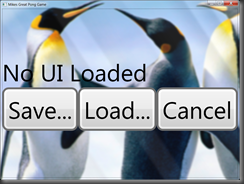 and find myself a new XAML file ( very similar to the one that I used on the previous post to replace the Silverlight’s version UI – in fact, just one changed around the namespace of Viewbox ); 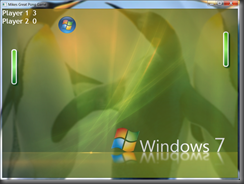 You can run the WPF version via ClickOnce from here if you have .NET Framework V3.5 Service Pack 1 and here are the projects for download if you want to play with the source-code. As Ben said, you’ll need to tweak your PATH variable to pick up the VC\Bin folder for CL.EXE.

Just one more note. I did find that I was having some trouble with the original PreprocessXaml.targets file that Ben had and it seemed to be because I was linking to MainPage.xaml in a separate (Silverlight) project rather than in my project. What I was finding was that the pre-processed XAML file ( MainPage.i.xaml ) was being dumped out in the Silverlight project’s folders rather than in my project’s folders and this caused a bit of a muddle. I hacked the .targets file to suit my purposes and it’s included with the source code below but bear in mind that this was really just a quick hack to fix my problem and you’re 99.9% likely to be better off with Ben’s original file than my version.