Internally, I’ve had a number of people ask me “What’s in Windows 7 for Developers?” or “What will developers get out of Windows 7?” and so I thought I’d put together a short post with some links around places to go for information on Windows 7 and what to expect when Windows 7 ships.

The first point I’d make is one that’s very important to me. Developers are users too. In fact, they’re “power-users”.

They’re running the standard apps that most users run but, beyond that, they’re also running ( at a bare minimum ) a bunch of development tools and some of those might be RTM or preview along with perhaps a whole bunch of SDKs ( RTM/preview ) that they’ve grabbed off the web which may/may not be compatible with the latest version of the operating system and then they’re switching between apps like;

and so the first thing that you need when you’re a developer is a nice, stable, performant operating system. Anything else is like building “sand on sand” or starting to build an extension to a house that’s not finished.

And so, for me, one of the primary things that I think is important about Windows 7 is that, from my experience so far;

Just to put that another way;

The other thing that I’d like to call out is that Windows 7 includes;

as I think that’s a very important thing to bear in mind when it comes to deploying solutions – when Windows 7 ships it will come with the latest and greatest released version of the .NET Framework and I think that’s a really good thing.

Beyond this, in terms of getting started with Windows 7, there’s the standard places to check out such as;

which has links off it which are relevant to particular groups of developers such as;

Then there is, of course, the Windows 7 Blog which you shouldn’t be without;

and I think it’s very significant that the blog was named Engineering Windows 7 as I think that the name ( and of course all the posts 🙂 ) points to the fact that the product team wanted to get information out to developers about how the product is being put together rather than that be some opaque process.

Then there’s also Yochay’s blog which I’ve been following very closely and is specific to developers;

Once we get past that, there’s a bunch of things that you should probably read/watch. Firstly;

In reading through this – what stands out;

and you can download the guide itself from here. I took the document and turned it into SmartArt in a couple of minutes as I think that makes it easier to look at; 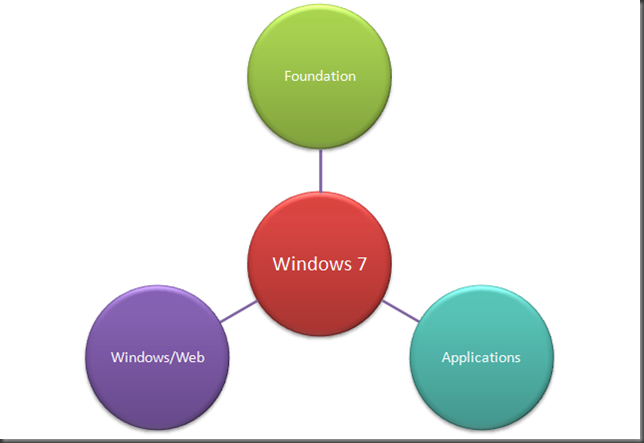 and then quckly breaking that down into; 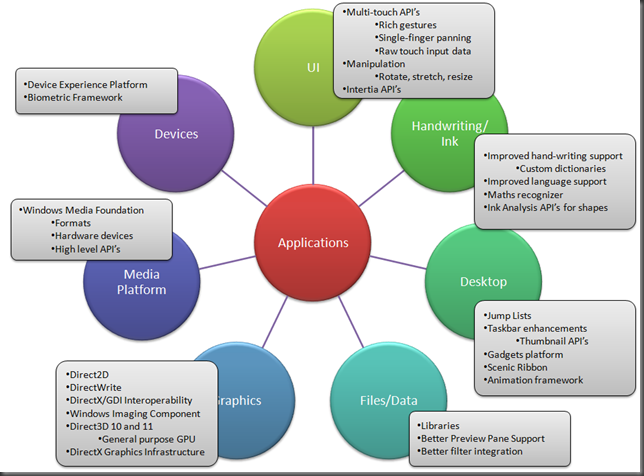 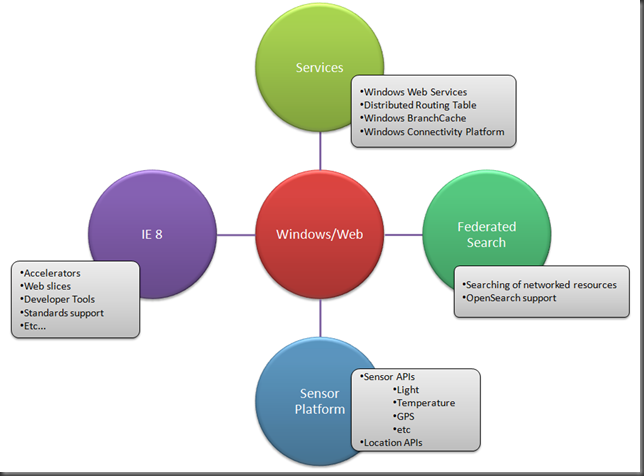 Then there’s also the;

as another great reference.

Now, those API’s are all in the C/C++ world so if you want to get access to these then you need to check out the;

but if you’re coming to this from a .NET point of view then there are some things coming in .NET Framework V4.0 around these areas but ( both in the meantime and in addition ) you’d want to check out the Windows API Code Pack for the .NET Library ( for me, it’d be very nice if this was in the platform along with .NET Framework V3.5 Service Pack 1 but I guess that you can’t have everything ). That is currently up here;

Beyond there, there is a lot of content out there around Windows 7.

I’d also like to build up a good collection of blogs ( I have a few but not a comprehensive set) and I think I’d like to get all this content hyperlinked off some application – I might do a little work with Silverlight to make all this more explorable but, hopefully, this provides a good starting point.