This previous post had me thinking that the WPF application that I built across these posts;

would start to improve if I offered the opportunity to “invite others” to shared groups of photographs.

So, I re-worked the code. There were a couple of things that I came across whilst doing it;

Having re-worked my code, I end up with an application that behaves a little like this.

I run it on two machines.

I can start off on the local machine by creating a photograph album;

and then adding a photograph to it;

Then, if I want to invite another user to my album then I need to authenticate with Windows Live ( to get my Contacts from the Cloud LOE );

and then I have a right mouse menu on an album that raises an “invitation” dialog box; 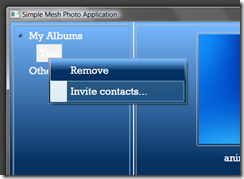 which raises a dialog box for me to choose who to invite;

and so I invite the other user. He then gets an email;

and follows the link to the Live Desktop;

in order to accept the invitation; 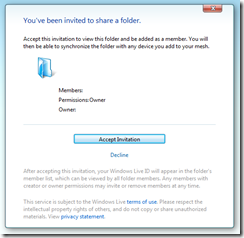 and that user can then go and add a photograph into that album;

and that shows up for the first user again;

and we’re syncing photographs quite nicely between the users here. Note the MyAlbums collection would also sync if the 2nd user was the same user as the first user ( if you see what I mean 🙂 ).

Naturally, it could be smarter about how it displays those “Other User’s Folders” and I’m sure there are bugs in it but it might help you with something that you’re doing.