Following up on this post, I thought I’d see if I could share some files through the Live Mesh and perhaps move on from writing a console application.

Photos seem to be the most obvious choice so I thought I’d start there.

What I figured was that I would just want a very simple way of storing the data so I figured I’d use a single MeshObject with a single DataFeed hanging off it and into that DataFeed I would add my photos.

What I got stuck with was how to deal with the various interleavings of synchronisation. Imagine the scenario;

My basic problem is that if I choose to work against the Local LOE then how can I definitively create the single MeshObject that I want to store all my photo data? I’m not sure how I differentiate between the situation where;

In the end, I decided it was futile to try and so what I went with was;

So, it feels like if I had 100 machines and I ran the application on all of them at the same time I’d probably end up with 100 MeshObjects whereas if I ran it on one machine and then waited a while before running it on the other 99 then I guess I’d hope to end up with just 1 MeshObject which would have sync’d to the other machines.

At least – that’s what I was thinking about when I was trying to write this code. Whether that’s what I actually came up with ( and whether it’s a sensible thing to do in the first place ) is another matter altogether 🙂

In many ways, the code is similar to the code I had on the previous blog posting except that it tries to deal with the problem I’ve just outlined and it stores thumbnails of images into the DataFeed rather than just storing a single stream but I’ll not paste large chunks of the code into this post.

Here’s the app running on my local machine and on a remote desktop sitting behind it – the UI is just a ListBox and 3 buttons; 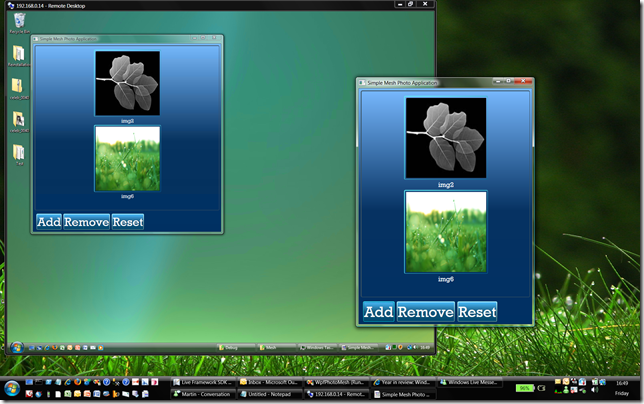 I’ve uploaded the code so you can have a play with it if you like or maybe it’ll provide the basis for something you’re doing. Bear in mind that this code is pretty rough as I’m just using it to try and figure out what the Mesh can/can’t do for me via this SDK at this point.

Here’s the download link for the project ( you’ll need the Live Framework SDK ). Some other things that interest me around this are how I can publish arbitrary data to the Mesh ( I think I read about being able to attach an arbitrary, serializable .NET object to a DataFeed somewhere ) and also how I go from an installed client application like I’ve got at the moment to a Mesh-enabled application.