I don’t really use Twitter but I’m surrounded by folks that do and I’m more and more aware of its impact as if you turn up to any kind of event or gathering these days then you’ll know that someone will come along and say whether it’s being reported well/badly in the various tweets that it’s generating.

Because of this, I wasn’t aware of “Twistori” but Marc pointed it out to me the other week and said that it’d be cool if we had an internal application that did something similar that we could maybe use to display on a plasma TV somewhere or perhaps on a projector.

So, I set about building something simple with WPF that uses the Twitter (RESTful) API ( I stress that word “simple” as I didn’t really want to go off into days and days of effort 🙂 and so I thought I’d share that here. 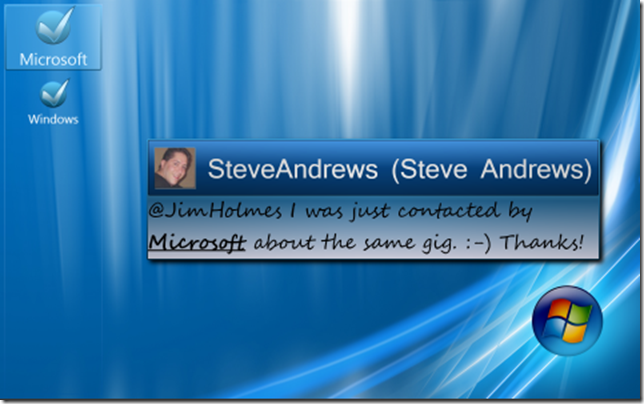 and it has an application configuration file that looks like this;

which drives what it does which is, essentially;

so, it’s pretty simple and the UI largely involves a ListBox, some CheckBoxes, some TextBlocks, an Image and a few layout panels and animations.

Note that the background image is taken from www.hdwallpapers.net so I’m not sure whether I should really be distributing it like this and I’ll take it out if someone asks me to.

Here’s the app for download. All bugs mine (of course) and I know there’s one or two in there. The next post will start to look at putting something very similar to this together.