Localisation/Globalisation isn’t my subject and it’s a gnarly old topic so I generally leave it to folks like Guy who has a specific interest in that area, knows his onions and wrote the book! 🙂

However, a couple of things sparked my interest here.

One was because a customer was asking me about it earlier this week and I hadn’t really looked at it other than to expect it to work much like the regular .NET Framework.

Then I saw Tim’s post over here and that sparked more interest so I thought I’d take a dig in and see if I could get a bit of understanding.

This is explained up here for Silverlight;

but straight away I was foxed by the feature.

I wrote a little code to see how CurrentCulture and CurrentUICulture were reported in a “Hello World” Silverlight application and I got;

I was interested in this, so I changed the culture of my browser to French and re-ran my Silverlight control. I got;

Hmm! So, I went and hacked the hosting HTML page to force the culture with;

and then Silverlight reports;

by default culture and uiculture are set to “auto” and, clearly, by default these are not getting their value from the browser but are, instead, getting it from the Operating System. Note – there’s documentation up here which says;

“The .NET Framework for Silverlight provides data for the invariant culture, but it retrieves information about all other cultures from the operating system. This means that the information that is available to a specific culture may differ across operating systems or even across versions of the same operating system. In some cases, data may even be unavailable, in which case data from the invariant culture will be used instead. The developer should make no fixed assumptions about the values of particular properties or particular objects returned by specific cultures” 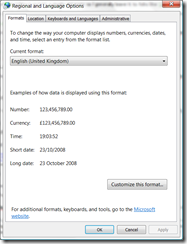 changes the value reported for Culture in Silverlight whereas changing the display language; 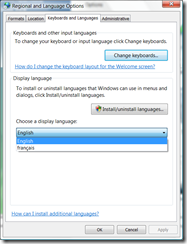 What if I wanted to pick up the culture from the browser rather than from the Operating System?

I’m not sure whether there’s a consistent way of doing this from script in the browser so I wondered whether it might be better to do it server-side when the page is requested. However, when I look at the ASP.NET Silverlight control it doesn’t look to have settings for culture/uiCulture so I threw something in to my ASPX page based around an object tag instead with some server-side generated bits;

and then as long as I’ve got my web config setting up to set culture and uiculture based on browser settings as in;

and then I can pick up the settings from the browser and get the routed into the Silverlight control instance.

Ok…that gets us to the point where I can either have culture/uiCulture set by;

And CurrentCulture’s going to be used for numeric formatting, date formatting, comparisons and so on – all as detailed in the documentation page.

What about resources loaded based on CurrentUICulture? How does that work?

Starting with the easiest example that I can try, I put a button onto a form as in;

Then what I want to do is;

Usually, this doesn’t matter but it does here because I want the XAML system needs to construct an instance of myResources.

If I want to now add French resources I can make a new resource file named (e.g.) myResources.fr.resx and add that to the project with a btnText string in it.

From there, I’d expect that things would “just work” but if you’ve looked through the SDK documentation then you’ll know that I now need to;

With that in place ( and using the previous page that sets the UI culture based on the browser’s locale ) I can browse to my page and set my language to be english/french and get to see the right resources loaded for that language.

Taking that one step further, what if my one application is using a control from another assembly? I can apply the same approach in that I can;

If I then use an instance of my new UserControl on my main UI ( by adding a reference to the class library ) then that all works the way I’d expect in that changing the UI culture sets the resource culture for both my main UI and the control used on that UI.

So, that all works but it’s interesting to look at what’s going on from the point of view of deploying my code.

and then in the fr folder is;

That is, all the resources that I need for the application have been built into the XAP which means that my XAP is going to grow in size as I add additional languages and resources and if my user’s were (say) 99% English or 99% French then they are paying for the download of all these additional resources in my XAP file when they don’t actually need them.

I might prefer to leave all these additional resources back up on the server and dynamically load them for the user if they need them – I’ll try and follow up with a look at that in another post.