WPF Version 3.5 Service Pack 1 has a new WebBrowser control as I talked about a little here;

and some of the nice things about the control are;

This seemed to be enough to form the basis of using the Virtual Earth control inside of WPF so I set about trying to build a control that did a very basic version of that.

The basic approach that I took is;

That’s pretty much it – I’ve not finished it yet by any means as I want to add some push-pin functionality and I’m sure there’s bugs in this thing.

So, everything there is databound. Seems easy but the “problem” I got into was that WPF’s databinding would start setting these properties and I would pass them through to the Virtual Earth control before it was ready to accept them and it would fail a lot.

So, I had to put a bit of a queue in between the WPF control and the Virtual Earth control where I queue up commands for the control if the control has not yet said that it is “ready”.

Here’s an example of the control in use in a simple test-harness; 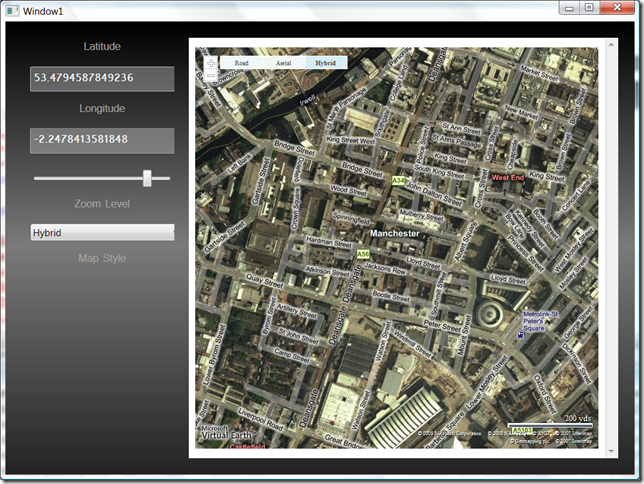 I’m sure that it can relatively easily be “broken” if you play with it too much but I thought I’d share it.

Here’s the solution for download – including the control and the test harness. I’ll move this forward a little bit because I want to add the ability to search by post-code and add a few push-pins but I thought it was worth sharing.